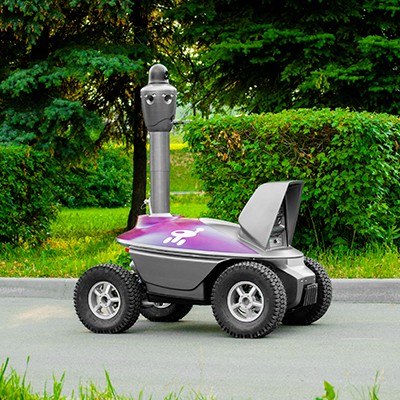 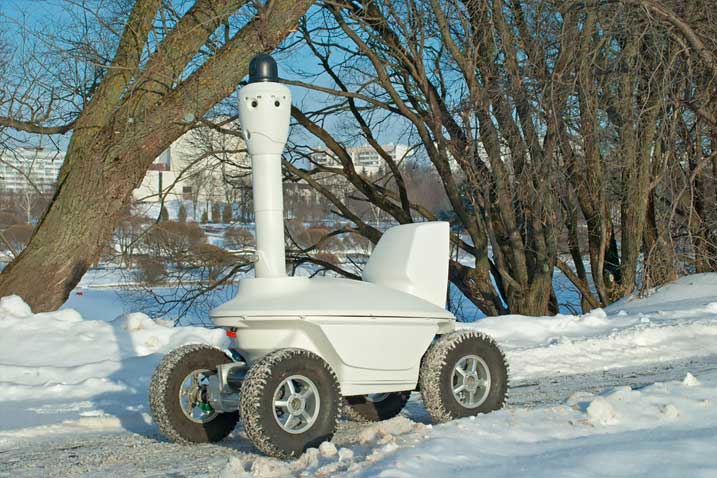 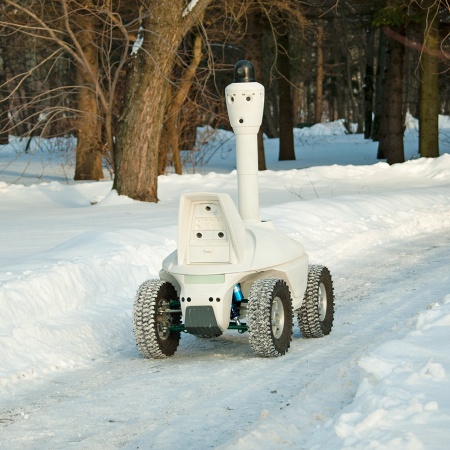 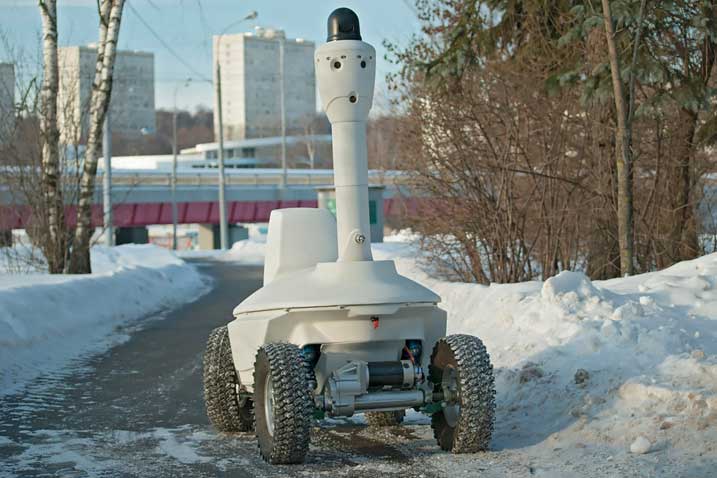 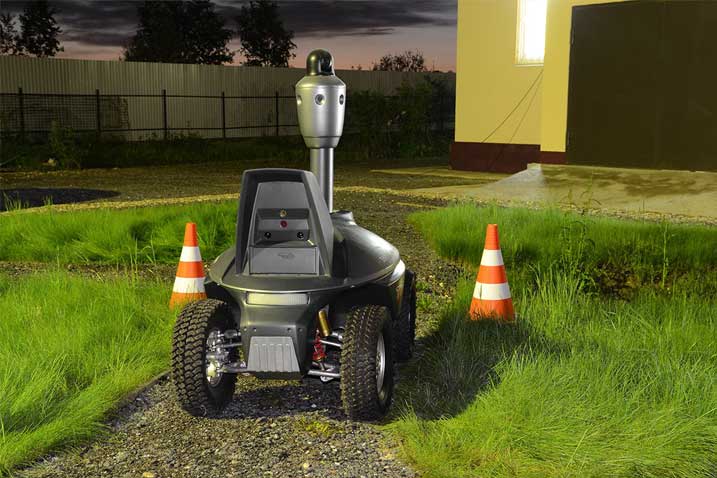 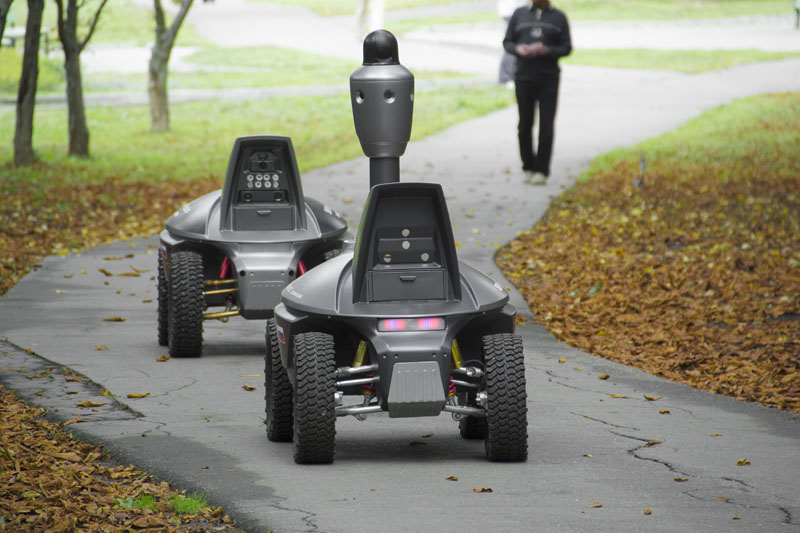 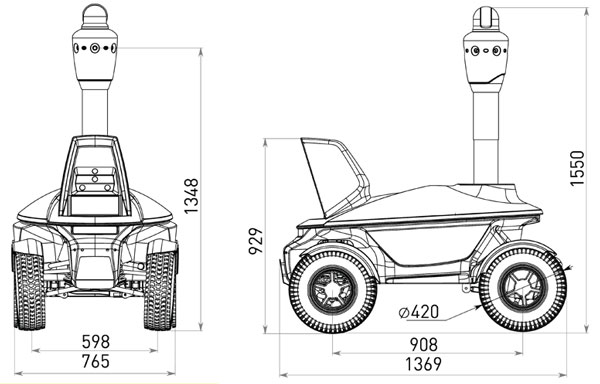 It is a reliable solution for assuring security of personal and business property. Mobile video surveillance system continuously patrols the secured area, greatly enhancing the level of protection and dramatically reducing the dependence on human factor, especially when patrolling areas an expanded territory.
Tral Patrol robotic complex is designed for autonomous movement along pedestrian pathways and wireless transmission of video picture taken by built-in video cameras.
The robot consists of a wheeled chassis with electric motor drive, guided by automatic driving system, and of independent video surveillance system. The system of video driving provides all-weather and day-and-night driving without operator guidance. While the robot moves along patrolling route, it transmits video picture taken by all-round surveillance cameras. When it reaches observation position, its tracking system is activated, focusing the robot's turning camera on moving objects. Video pictures from all cameras as well as robot's location indicated on electronic map are transmitted to tablet PC of the operator or to the Internet.


Security robot at work!
Security robot is designed for outdoor patrolling because of its intelligent video surveillance system, which automatically scans the secured premises. It stops at pre-selected positions for optimal surveillance and inspects the area within 50 meters (164 ft) range to detect any moving objects or people.
In case of detection, the video surveillance system focuses its steerable PTZ-camera on the object and transmits the video to the security post.
Depending on duration of patrol shifts, area size, and a number of observation points, one or several robots can be involved in patrolling a specified area. Patrolling can also be made by a group of interconnected robots. Such method helps to eliminate overlapping of observation zones and ensures continuous monitoring of critical areas from different positions.
Security robot is generally used for protection of solar power stations, gas and oil storages, electricity infrastructure facilities, warehouses and factories’ sites, home gardens around town houses, coastal zones of tourist centers, and residential communities.
Used in combination — new generation security robots working together with security guards — they form an inpenetrable perimieter over any large area containing multiple guard houses and patrol routes.

Full-on worry-freed robot performance!
Tral Patrol 4 is a rear-wheel electric drive UGV powered by accumulators. It tackles parks or surfaced roads with equal confidance. Pedestrian paths 0.8 m (2.6 ft) wide are more then enough for an ROVER-S5 UGV to glide through with room to spare.
A visual navigation system allows the ROVER-S5 not only to detect and avoid obstacles before returning to the preselected route but it will perform with equal ease by day or night. It is equipped with an electric-powered rear-wheel drive with differential. For winter driving studded tyres are supplied.
How much power does this robot pack? Three built-in accumulators will keep it driving forward until the robot’s automatic return to a charging point.

The second system consists of single road detection camera that provides the exact path image for the autopilot and keeps the robot on the route.

The most important element of our system is its AI-enhanced software, at the heart of which is the Multi-Agent System (MAS). Each robot uses set of sensors to receive information about the environment. By processing the data coming from all these sensors, the traffic control system solves the problem of building a motion pathway. The primary source of data for successful motion pathway solution is a vision system capable of creating a map of alternative pathways. The vision system corrects and improves the map with every repeated passage. In the event of obstacles, the system detours and thus explores the surrounding area. Thus, the GPS navigation system becomes secondary in choosing a route.

Upon encountering obstacles along the way, the system automatically decides on the detour path selecting from a variety of possible ways. Naturally, every obstacle checked is this intruder or not. In the multi-agent system, all participating agents (robots and base servers) may access the information circulating in the system. Once one agent knows the information, it becomes available to every agent within the system. In fact, the ability of sharing information and executing group tasks is exactly what makes a group of our robots a Multi-Agent System. For easy visual perception, please watch the video.

The most exciting things happen when robot detects an intruder. We call this behavior the Swarm Intelligence. Upon detection of an intruder the robot stops moving along its designated route and switches to the optimal path to the intruder

The chosen route is not simply the quickest route to the goal; its purpose is to find locations where visibility (video picture) is the best, with minimal disruption. Target coordinates are transmitted and shared across the group of robots. The robots nearest to the intruder start looking for the intruder with their PTZ cameras. Other robots that are not involved in the response to intruder increase the interval between them and continue their regular path. The robots nearest to intruder activate the alarm, and begin transmitting video of intruders and their GPS coordinates to the central guard station and to the guards patrolling on-site. The human operators review the alarm and make decision to proceed to intercept, or to cancel the alarm. If the operator determines the target as the intruder, the robots will continue to follow the intruder until the arrival of human guards and cancellation of the alarm.
If the operator determines that the target is not a threat, picture and video data is added to special database of safe-pass objects.  When these objects are detected by robots in the future, they will not trigger the alarm and the robots will stay on route. This experience is shared across the group of robots and is available to any robot within the group. Thus, all the robots are trained to determine their behavior in different situations and Artificial Intelligence of the swarm is growing. For easy visual perception, please watch the video.

Video picture and data are transmitted via WiFi. Video taken by all cameras in the course of all patrolling is saved. During robot's recharging video data can be copied to external hard drive or to NAS (Network Attached Storage).

Driving Along the Route without Operator Guidance

A wheeled robot moves between observation positions under control of automatic driving system without operator guidance. The route for driving is set during the first robot's run, guided by the operator.

The system of video driving allows robot to successfully drive along the route under conditions of unstable reception of satellite navigation system signals, for example, in forest parks or in radio shadow near building systems. Driving in the automatic mode the robot recognizes obstacles and drives around them. When accumulator batteries run low or become too cooled, the robot automatically drives back for recharging.

The robot can surely drive on any type of hard coating. It has enough off-road capacity to overcome small puddles and natural soil paths. In winter the robot's route shall be regularly cleared from snow. Amount of fallen snow not preventing the robot from moving along the route corresponds to the typical mean one-day snowfall in the midland of Russia.

At night the robot can drive along the areas with street lighting, organized according to appropriate SNiPs (construction norms and regulations) for: pedestrian streets, sanatoriums, car parking lots, storehouses and public utilities zones. Driving at night the robot switches on lower beam LED headlamps.